Okay, so I’m still taking a break from writing and viewing some Bela Tarr films. I’ve had the most random urge to rewatch some films as of late. So, there’s been a massive heat wave this week and yes it’s the middle of summer, so what better movie to watch that really captures the essence of this blazing hot weather? 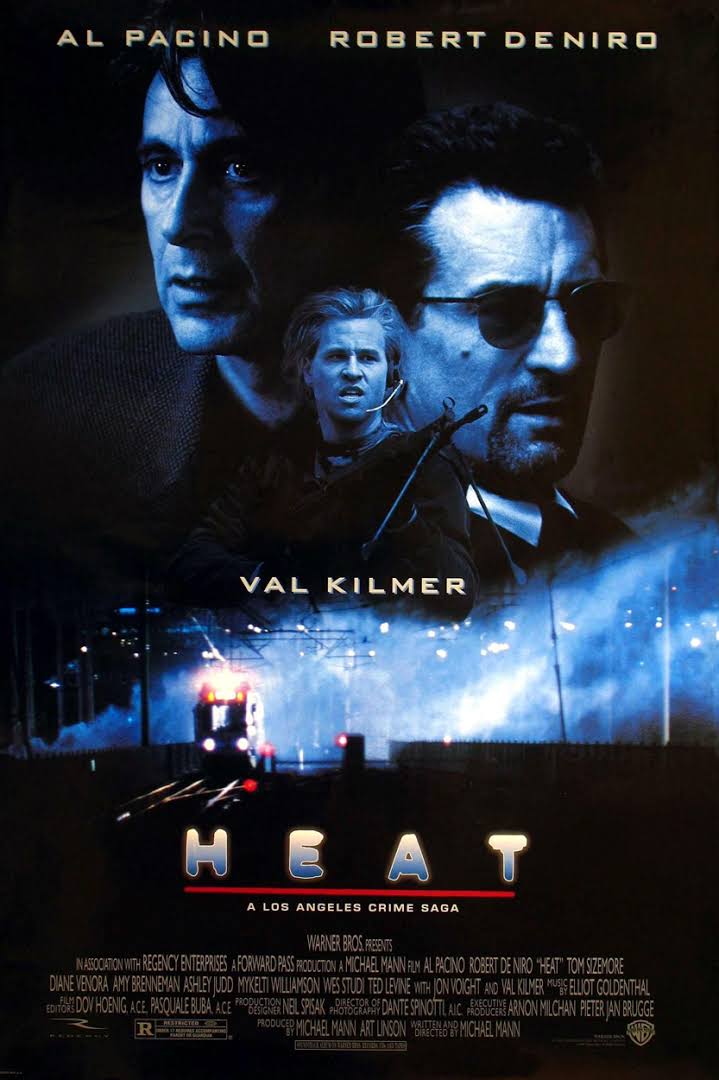 Michael Mann’s 1995 film, Heat is in the top 10 of best heist movies that I’ve come across after scouring the internet. What makes Heat so incredible is the caliber of professionalism between Al Pacino’s character Lieutenant Vincent Hanna chasing after criminal extraordinaire Robert DeNiro’s character Neil McCauly and his crew, Michael (Tom Sizemore), Chris (Val Kilmer), and Trejo (Danny Trejo).

Heat was made about two decades ago and the thing that really captures my eyes and ears is the attention to detail, savvy dialogue, and somewhat stoic realism Michael Mann brings to the screen. The essence is captured in Al Pacino and Robert DeNiro’s performances. I mean their lives are parallel to each other in a very symmetric and dynamic way and Mann weaves it together like a pretty bouquet of tulips. Yeah… that was really cheesy. ANYWAYS…

For example, the iconic diner scene where McCauley and Hanna have coffee talking about their philosophies in life and how if either one of them crosses the path of one then the other is going down. Their passion is what makes the magic on screen ignite like a glorious wildfire spreading rampant and burning everything in it’s path, feeding off air and furiously expanding its ferocious nastiness all over. Okay, it’s dramatic but think about it, both of these character’s passion is ignited by adrenaline. McCauley is in it for the score and the money and does everything meticulously, while seamlessly and professionally having zero attachments which is basically eliminating personal obstacles in order to be successful. Vincent’s adrenaline is the chase of hunting down his prey. Bringing the bad guy to justice by also taking calculated risks and strategically planning his capture while also keeping a barrier on his personal relationships which of course suffers. We’re basically watching a film about two men and their lives during a tense showdown that makes my head spin torn between rooting for both the bad and good guy. Cruel.

There are so many dark cinematic moments in this two hour and 30-minute crime drama such as Vincent finding his stepdaughter (Natalie Portman) in a bathtub full of blood, or Charlene (Ashley Judd’s character) signaling her husband played by Val Kilmer that the cops are onto him. She’s standing on a balcony as he pulls up into a parking lot, looking up at her totally like Romeo and Juliet in the infamous balcony scene except this is despairingly backwards. It’s a cold moment and the look on Val Kilmer’s face will break your heart as he gets back in his car and drives off. It’s violent, dark, but engaging nearly like a Shakespearian tragedy on some level which brings highly charged dialogue ranging from creepy nightmares to the “you live among the remains of dead people” monologue delivered by Justine, Al Pacino’s wife played by Diane Venora.

In regards to the story being based on true events, Heat and I quote, “it is the most elegant heist films ever crafted” according to a Rolling Stones article published in 2015. There was a real Neil McCauley who was a thief that Charlie Adamson killed in Chicago in 1963 and they actually did have coffee prior to that. How crazy is that? I’m in awe which to me makes that scene even more alluring and powerful. And, I believe that’s what makes this story such a successful film the fact that’s based on some authenticity which is pretty bitchin.