When I read about French, filmmaker Julia Ducournau’s RAW last year, I intrinsically knew it be something I’d find fascinating to study. Mind you, I’m still studying it. It’s disgusting, grotesque, where all the horror lies within the flesh, blood, hair, flakey skin, eyeballs, basically your whole anatomy making it narrowly bearable. Its controversy is just as stigmatizing as any Catherine Breillat film and some might even be up there with gnarly Cronenberg film. Whatever happened to that guy?

I constantly read articles on how audiences reacted and this may have attributed to some of it’s success. Personally, I feel like it was all an overhyped marketing strategy. If there’s anything I’ve learned in school, it’s how do we find effective strategies to get eyeballs to content. And sometimes you find a film, that just stands on it’s own two feet, where its content is so freakishly satisfying enough to create intrigue. Marketing is its own weird contrived kind of science. When audience members are passing out, vomiting, and are handed barf bags in some theaters, that opens the floodgates to success. Of course this is nothing new and has occurred in the past. Remember THE EXORCIST back in 1973? People ran out of the theater screaming or perhaps most notably Lars Von Trier’s ANTICHRIST which several critics lashed out as “an abomination”. Agghh! I’m still suffering the trauma of that one. Alas, every once in a while you get that special gem of a film that achieves critical acclaim and grosses people out. It’s its own kind of special, right?

RAW gives us a bite of forbidden delicacies that pivots our curiosities in some uncomfortable terrain and Julia Ducournau gives us that in a simple coming of age story. And everybody knows there’s a population of women who love horror films. Bela Lugosi said it best, “It is women who love horror. Gloat over it. Feed on it. Are nourished by it. Shudder and cling and cry out and come back for more.” So why is it any surprise female directors nourish the horror genre? Did everyone forget who Mary Shelley was? Women have been making horror films from the get go and are just now barely being recognized for it. And, I think part of the problem with that is we keep genderising films. Julia Ducournau defiantly states this in an interview:

“I do believe that my movies talk to anyone. I don’t want to genderise my audience or my movie; this is just another way of putting people in boxes. I’m a woman, yes, I’m a strong woman, and my movie is feminist, but I’m sure that everyone can get it. Why does no one say that Scorsese with Leonardo DiCaprio make movies for men by men? No! Of course women are going to see it! Why would it be different the other way? Why? It’s the same way that they do female razors that are pink! This is a fucking razor! Everyone uses it! There are not 300 ways to use a razor. Why would it be pink and cost one Euro more?”

You have to hand it to her for being fiery defensive and she makes a strong point on why so many are missing the premise of her film. Yes, there’s heavy sexualized- cannibalism going on, but it’s also about the human body, desire, lust, hunger, and finding a way to survive all this craziness while not necessarily make sense of it but accepting it. To many, the human body is gross in all it’s depiction or are we meant to see beyond the scope of that? I believe that’s a crucial part to this film. Okay and there’s a shit ton of blood but that’s beside the point. And so many Hollywood films do the opposite, triggering our subconscious to see the clean, thin, beauty of it all, which makes me roll my eyes every single time because it lacks authenticity for something unattainable as the idea of perfection.

Julia Ducournau’s RAW is an entrée of great magnitude, riding heavily on the taboo subject of cannibalism. She has mentioned in interviews that “cannibalism is part of humanity.” The story focuses on Justine, a 16-year old girl entering Veterinarian school for the very first time, and she comes from a family of successful veterinarians. So she has a reputation to uphold, which is interesting because it makes me question the legacy of her parents’ and how their story unfolded. Justine’s sister, Alexia is already a year ahead of her and becomes more or less a tour guide of what’s in store for her baby sister. And, since Justine is a vegetarian, the moment she’s forced to eat rabbit kidney as a hazing ritual that first week of school, things turn in a very wayward direction. It’s the equivalent of awaking a sleeping beast that’s been laying dormant for sometime and the antidote to tame it is unattainable. The beast has awoken and it will not be repressed. Oh hell.

She eats flesh and can’t contain her hunger for more. But, aside from cannibalism, the focal point is also Justine’s body. Throughout the narrative, her body is enduring the shock to eating flesh, leaving her with an aggressive, disturbing rash that evolves right after her first taste of meat. And Ducournau’s close ups are unforgiving. The camera’s eye makes you feel that body of horror but in contrast to that, it’s beautifully captured with that single overhead light in a pitch dark room, hovering over Justine’s bed as she fiercely scratches to reveal a crazy looking has invaded her body. It makes you want to scratch your own skin.

There are other fun moments layered in this decadent piece of cinema. For starters, an avalanche of blood is poured over the new recruits, who all get to walk around in sticky, dried bloodied lab coats for the remainder of the day and to top it off, eat lamb eyeballs. Oh yummy. There are also genuine moments where we see a horse being sedated, and the students get to observe it succumbing to it’s unnatural defense of it’s body losing control to sleep. It’s somber in a contemplative sort of way especially when we see the slow motion bits of it running on some kind of treadmill. That had to be a reference to something. Then there’s the eerie moment when the rookies are all crawling on their hands and knees in the middle of the night, which is hauntingly captured in a wide shot as they approach the foreground. It’s such a creepy, cool shot making me think they’re pretending to be animals or maybe it’s intentional degradation since they’re the bottom of the food chain in at a veterinarian school. Either way the cinematography definitely enhanced the story making it feel like your partaking in this crazy journey. 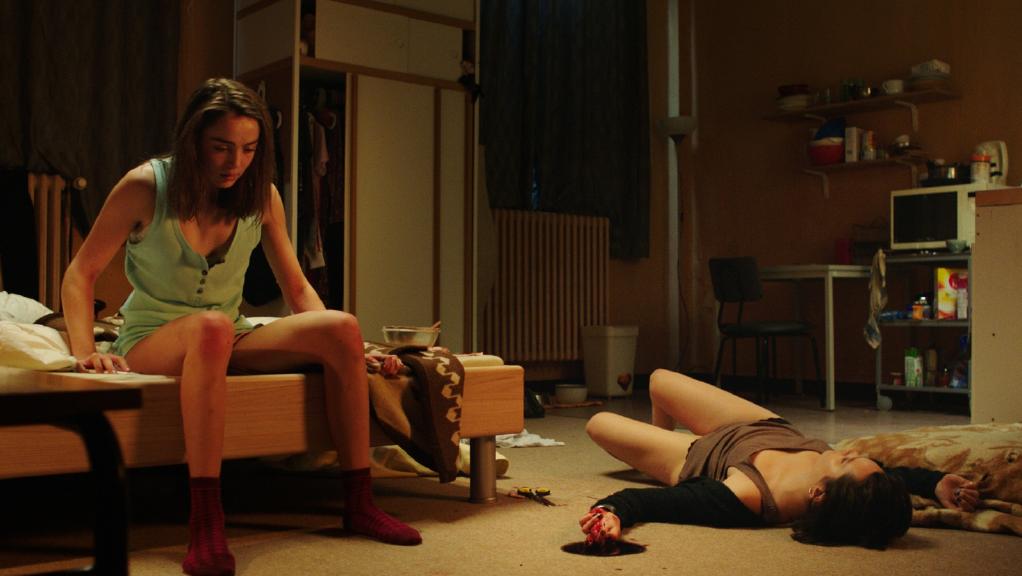 Another critical scene between the sisters, aside from having a lustful crush on the same guy, and the hilarious bikini-wax scene, is when they lock heads, pulling hair, biting each other’s skin off, while blood gushes everywhere. They aggressively duke it out like animals. All out of frustration and a mortified Justine is when she learns Alexia treated her like a drunken, dog at a party making her beg while dangling a cadaver’s dead arm in her face and it was recorded on a phone. It’s sick and twisted. Of course this all builds up to the bizarre, horrific climax. It’s gnarly but captivating because we realize their both cannibals and suddenly the crowd that’s developed around their little spat also realizes these sisters are freaks. So now it’s them pitted against everyone else, and instead of killing each other, they stand in solidarity. It’s a great sequence and interesting, because paralleling back to the bikini-wax scene there’s a moment where Justine is transfixed with the taste of flesh, and smell of blood permeates without any prime or reason, like it becomes a natural inhibition. It just is what it is, a forbidden, awkward nature she’s transcending into for the first time. AND SHE EATS HER SISTER’S SEVERED FINGER! That practical effects teams must have had a hell of a fun time on set! 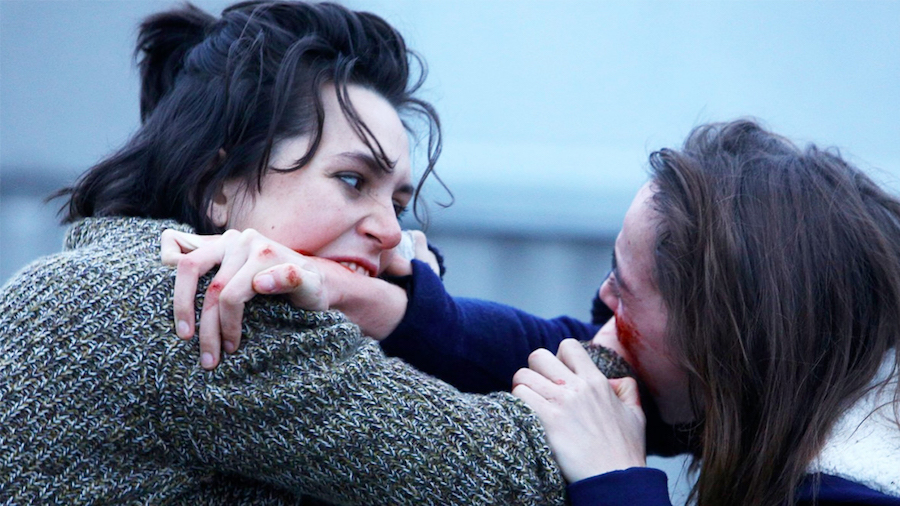 RAW is visceral beyond measure. A coming of age story with a meaty twist. Ambiguous to a certain degree. I’ll admit it, I was thoroughly grossed out at one particular sequence which involved Justine nervously eating her hair while talking to an instructor which immediately cut to her forcibly vomiting out that hair. It was like watching a plumber snake out a drain from his own mouth. That mental imagery was potent. Yuck! Yuck! Yuck! But I didn’t pass out, I just gagged while watching. Just reimaging it makes me queasy.

However, when revisiting RAW, I couldn’t help at times, but parallel it to Catherine Breillat’s FAT GIRL, a story also about two sisters in a coming of age story but in a slightly heavily sexualized paradigm. The ending had the same impact on me as it is shocking in an unforgiving, tumultuous manner and makes you bellow out, “WTF?” I love when movies do that. It kind of makes you look over here, while it pulls the rug out from under you. If body horror is not your thing, sit this film out or close your eyes at the icky parts. But, I do encourage you to try and watch it, because it tells a provocative, smart story of just a girl exploring the unusual changes of her body, something that happens everyday across the world with the exception of the cannibal twist. It’s only a movie, exploring outside the confines of normalcy. Even if it grosses you out, maybe ask yourself why?