First off, I’m going to start this post with Andrei Tarkovsky’s THE SACRIFICE and for those of you who have watched MOTHER! note the symmetry of the storyline. In THE SACRIFICE, the premise is about Alexander, an aging writer living with his wife in a house nearly on the outskirts of civilization are celebrating his birthday one weekend and as guests arrive for the celebration, they learn that World War III is unfolding, which prompts heavy emotions of insanity. (Sorry spoiler alert!) And yes there is a big house fire at the end of all of this! Essentially, MOTHER! (personally) is like watching a super active, clamorous, introspective Tarkovksy film in 2018. It’s as if Darren Aronofsky is channeling pieces of Tarkovsky’s spirit whether it’s intentional or mere coincidence, it’s certainly interesting. As a side note, I also find it fascinating that Aronofsky uses “It’s the End of the World” song by Skeeter Davis at the end credits of MOTHER! as both films are embedded with this sense of dreaded extremity.

Second, for the sake of discourse, art is subjective. Making movies outside the confines of well defined genre is an exciting concept and most if not some revered filmmakers have been doing it for years. (Tarkovsky, Antonioni, Resnais, Maddin, Marker) I think I stated this in my blog about A GHOST STORY, but every once in a while you get a gem of a film that takes a serious dive into some heady, symbolic territory. And it always feels like I’m barely scratching the surface when I explore these films nonetheless its freaking exciting to see a somewhat mainstream director with a mainstream studio make this happen. Darren Aronofsky’s MOTHER! is as exceptional as it is traumatizing to say the least especially when watching late at night.

What’s interesting to understand doesn’t lie in complexity, it’s the opposite, as it is a simplistic, allegory, shaped gruesomely from a sociological standpoint of human behavior taken straight from the Bible. We have (God) Javier Bardem playing a husband who’s a prolific writer, and his wife (Mother) played by Jennifer Lawrence who’s an all giving, nurturing soul who’s simply trying to renovate her home. The story escalates when a fan played by Ed Harris (Adam) shows up and suddenly becomes ill, grasping his rib cage. The following morning his wife Michelle Phiefer (Eve) shows up out of the blue and is also invited to stay by Bardem to which the couple now marvels at his writing and at one point sneak up to his sacred office where he writes. They break something of his and get in throuble. This is unsettling to Mother but she adjusts as any natural source of vitality would by being hospitable. Later on the two sons show up at the doorstep (Cain and Abel) and well, you know how that story ends. Did I mention the house has a heart? The heart symbolizes life obviously and how Mother is connected to that life. It’s a very symbiotic relationship captured quite beautifully in how she instinctly senses the ongoing changes as humanity slowly tear things apart. You watch the heart gradually evolve as time passses and it isn’t necessarily for the best unfortunately. 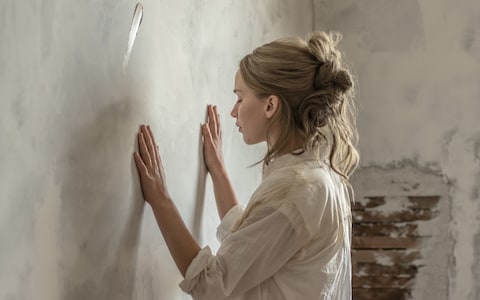 At the halfway point of the film, God has been uninspired until he sleeps with Mother, who becomes pregnant and suddenly he’s ignited with new inspiration. He writes which turns into success bringing a crap ton of people to his doorstep, almost like they’re there for the birth of a new king. Except it doesn’t quite go down that road. Mother is on the verge of giving birth but all hell breaks loose!

As the story escalates it’s heightened with the stark contrast to humanity in all their hindering idiosyncrasies to destroy what nature creates. This home that Mother tries relentlessly to keep sacred, comfortable, and ultimately a paradise is inherently ripped to shreds by cupidity, barbarity, demoralizing despair all in discombobulating excess. The second half of the film turns into a tremendous nightmare. After Mother gives birth she gets her ass kicked and it’s not easy to watch! But she does fight back for a brief period, because she’s pissed! Her newborn baby is savagely destroyed before her eyes, and she unleashes havoc big time, ultimately setting fire to everything. It also could be noted as the story of Christ but it feels a little fuzzy as it unfolds, skewing more towards her perspective of the tragedy even as Bardem (God) shouts, “They should be forgiven!”

What’s most fitting is Bardem’s profession. He is a writer (creator) and is worshipped for it, cultivating an enormous following of people, who all seem to just want a piece of him, whether it’s a personal possession, a photo, or just to be in his presence and it creates a pandemic (in a sense) of insanity evolving into more strands of insanity. This is phenomenally orchestrated in jarring camera movements, fantastic ambient sounds, no soundtrack whatsoever, which kind of reminds me of a few Andrzej Wajda films. It’s batshit wild!

On an offbeat side note, when asked about this film, from my friendly neighborhood video rental store cinephile guru, ( a guy named Allen) I said, “You have to keep in mind its an allegory and if you can focus on that symbolism, dig a little deeper, in theory it should be a gratifying experience. If you love weird, art films then yes this movie is for you.” A nearby customer returning his dvd completely scoffed at the film and said as soon as he got 5 minutes into it he instantly knew he would detest it. I wanted to throw my cellphone at him but that would result in assault, an arrest and my cinephile mug all over the news. I just have to accept everyone is entitled to their opinions and some people just don’t like digging deep into cerebral type films. It’s a shame because what an opportunity for discourse! Especially in today’s world, we need more weird films and old school video rental stores to stay in business!

To sum it up, in its basic form, MOTHER! is a rendition of the greatest story ever told; Adam and Eve, the great flood, Cain and Abel, and perhaps even the birth of Christ. But to take it up another notch, if God created Mother Nature and in Aronofsky’s version of the tale, Mother and God hookup, have a son, doesn’t that border along the line of incest or am I completely out in left field here? It gets kinda hairy interpreting the bible, but consequently it all comes down to, “God created our world and human sin damaged it.” ( I think that’s in the book of Romans according to my Google search)

Nonetheless, as much as I enjoyed MOTHER!, and being an empathetic, sarcastic, human being, the discernible ideology pisses me off specifically when Mother says, “What hurts me most was I wasn’t enough.” or “You never loved me. You just loved how much I loved you. I GAVE YOU EVERYTHING and you gave it all away.” Any of these quotes can be applied to any living soul with a pulse, who’s felt the ongoing giving and giving of oneself to suddenly be burned alive and gutted to the core. Your own heart crusts into a black substance and manifests into a magic, shiny, crystal, what a substantial metaphor! It’s painful but thrusts a mirroring of truth as human beings are unpredictable and flawed creations which begs the bigger question: God himself must be flawed? Please don’t strike me down with a bolt of lightning! As a flawed human being, I’m only asking a question.

MOTHER! is audacious, thought provoking, and at times paying homage to a little Tarkovsky and a little DePalma circulating around the parameters of horror and introspection. It certainly outlines the proclivities of the male ego and a woman’s instinct and how the two parallel or perhaps in this instance how they clash or perhaps weirdly balance each other out? Just as in THE SACRIFICE, the commonality is human morality and how the context of such a notion is jostled about in great sublimity! You have the frailty of the human spirit, despair, loss, hope, an awakening, destruction, a sacrifice and a rebirth all bridged in a matter of creativity to keep an ongoing cycle of this oddball, existential crisis afloat. In other words this film is exhausting but a great feast for the mind to fathom the circulation of thoughts begging the deeper questions about our existence on this tiny speck of a planet and what sacrifice does to the human spirit for the human race.

And finally below, I’ve added two photos one from Mother! and the other from The Sacrifice both highlight a silhouette of the main characters who each carry the weighty burden of immolation in very contrasting ways. Pretty cool right?